On racing Nationals and Worlds.

Nationals: So I have not raced a national championship since I was 13. It was in Louisville KY on a BMX bike and the results were lackluster. Mr Brett, Amy my wife, and I rolled up to Wisconsin for my first cyclocross nationals. It was Amy's first real cross experience. Up until this point she had only officiated local races.

30-34 National Champs. 2nd row start. 3rd wheel for a distance. First technical turn I dismount to run as a lot of others are doing. I fall flat on my face.
Cycling Dirt Video at 20 seconds in or whatever I just totally slip. Whoops.
The rest of the day was spent getting dropped back to 12th. Rough day.

Elite Nationals. Start too hard as usual. Blow up a bit, work my way back. I started feeling a bit better but got pulled. 43rd. Not really too much else to say about it other than it was a great experience and I wish I was able to race into it.

30-34 WORLDS. Ha. UCI says that anybody with UCI points cant do age group worlds. I am generally the 2nd or 3rd person after the UCI points run out at MAC races, so I figured that I could have a shot at doing well. Again, I wish that I could have raced more leading up to it. Random draw start = me last. Warming up an hour before the race, I crashed and bent my hanger and tweaked my finger. I sucked in the start and struggled to get up to the leaders. I burnt a few matches to do so and they were attacking each other. I went back and forth with some guys. It was all frozen ice ruts, so half of the race was just about not crashing. That was hard. Ended up 5th. In my heart I know that I could have done better, but oh well. 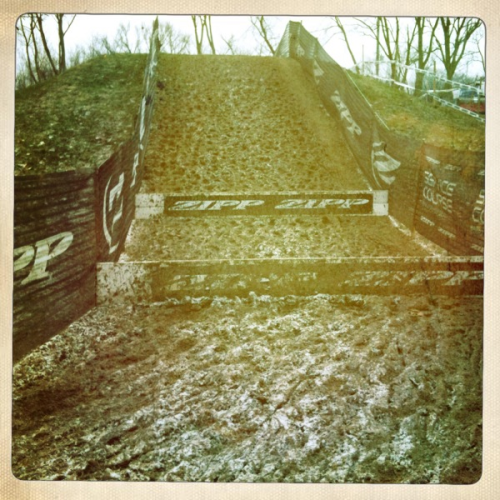 This is all ice. It was post holes. I was worried I would break my ankles running up it.
Posted by steevo at 11:43 AM