A weekend where my life was like a commerical for living a good life.

Yeah spring is here. We are all riding SOOO much and we are SOOO fit and have tans and leg veins and all that. 19.5 hours, 305 miles and 958 TSS last week. This is while working 50+ hours too. (seriously)

Friday night, the lady and I went and took in some culture. John K Samson played a show at a yuppie music venue. When I was like 15 I was into the punk band that he was in at the time, Propaghandi (saw in the 90's in philly). Then as I got over that whole thing and he was in a whiny band called The Weakerthans. I remember seeing them play at a DIY venue in Pittsburgh, and it was one of the best performances I think that I have seen. Anyway, much like his fan base (me) he is older, not as cute as he once was, and a little less edgy. He played well and it was memorable.

"I swear I way more than half believe it when I say that somewhere love and justice shine. Cynicism falls asleep. Tyranny talks to itself. Sappy slogans all come true. We forget to feed our fear." Saturday was a classic ride out to West Virginia. It is amazing how close West Virginia is to home. My brother was out of town, so I was showing his clients some fancy houses in his bmw. The honda fit is honestly a better driving car. I took my dudes out for ice cream. The stupid ice cream store on Main Street was closed. I had this surprise all planned and they were closed! I have some cash to my name now that I have a job, and it is really hard not to spoil these dudes.
Posted by steevo at 10:21 PM No comments:

As we rode up the hill, me and Babik:
"Man Colin is going to think that this was one of the 5 minute efforts." (colin is his coach)
"Funny I was just thinking to myself that I have never gone this slow up this hill."

Old dude keeps going back through our group

Brody: "man that is nice"
old dude: "i love it when people lust after my bikes"

At this point I ramped it up to 30mph to drop him cause I did not want to be around him any more. What the hell is wrong with people?
Posted by steevo at 5:32 PM 1 comment:

I want this information to be out there, because it is new. I remember in 2003 when Amy and I rode around Europe for 9 weeks, we flew in and out of Amsterdam simply because we knew that we would have no problems riding to/from the airport.

We used to ride a road referred to simply as "the secret airport road". This was a road that was clearly marked "do not enter" and "private property faa training facility"... but we would poach it for 3 miles or so. We once thought that we were going to prison when an SUV sped up to us, but he simply waved and passed.

A few weeks ago I was picking up Eddy from the airport and was stunned that there was a "bicycle crossing" that lead from the woods to the terminal. Then I read on the internet that a local rail trail (the montour trail) had made a spur connector to the Pittsburgh International Airport. I read a cynical line about how if Pittsburgh's transit cuts go into effect, it may be the only city in the world that you can ride a bike to, but not take public transport!

So yesterday we were out riding and decided to find our way to the terminal. It was a mix of old airstrips and service roads, but sure enough we pedaled right to the terminal. Sweet. I honestly think that this will be a big thing for bicycle tourists who want to ride the trail from Pittsburgh to Washington DC and fly out of both.

For some it might be a bad thing that the rail trail does not fully connect to Downtown and
the DC trail (YET!) however it will, and the ride into the city from this direction is not so bad.
Garmin link to map 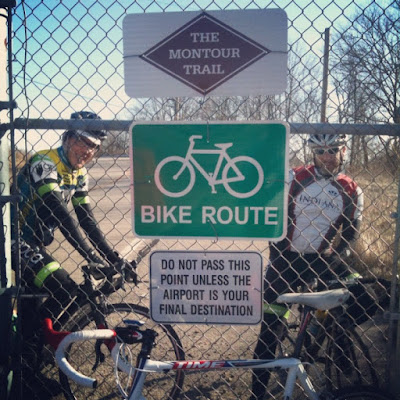 Seriously one of my life's biggest regrets at this point..

In 1992 Bad Religion were touring with this band Green Day. They were scheduled to play a small club in Pittsburgh called "graffiti." It maybe held 500 people? I remember not doing much in terms of school and planning on being grounded when the show was to happen. My brother bought a ticket, and I did not... Thinking that I was saving 12 dollars. Anyway I dont think that I ever showed my parents my report card that year and did not get grounded. Dang.

I follow a bunch of fake pro guys on the internet. All that they post about is how much they ride. It annoys me for some reason. I think its because I am working and not riding.

The ride that crushed Babik's soul. 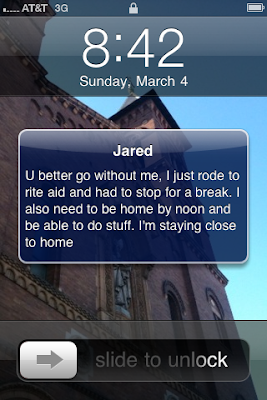 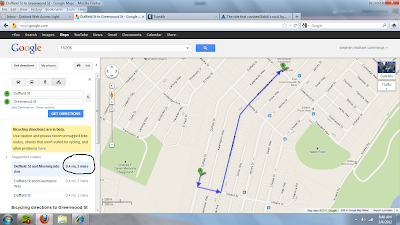